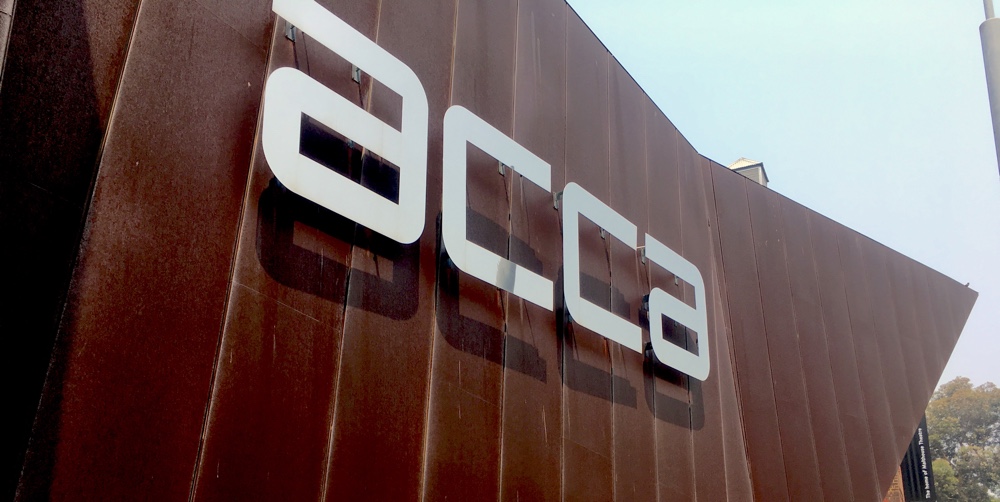 Back in the heady pre-pandemic days of 2020, I was lucky enough to be visiting Melbourne in Australia. When I discovered there was a group show at the ACCA, the Australian Centre for Contemporary Art featuring Zadie Xa, I naturally had to visit. I’d heard about her work, but not seen it in the flesh. And I was intrigued to see the work of the other 5 artists showing alongside her.

Writing this many months later, it feels like a total luxury to have swum in these six artists’ immersive installations. My immediate recollections now are having been met by sugar pink Grecian satyrs, bearing tablet screens, by the artist Madison Bycroft. Then descending into the watery deconstructions and reconstructions of Zadie Xa’s oceanic myths. Becoming a console player in Lu Yang’s aptly named “the great adventure of the material world”. Then things becoming darker and, to me, more impenetrable with works by Tianzhou Chen and Justin Shoulder. And lastly returning to the real world via Sahej Rahal’s algorithmically programmed sculptures.

You’ll probably be able to tell my heart was very much stolen by Madison Bycroft’s and Zadie Xa’s work – how they delve into myth and folklore and show us how it is still part of our life today. Here are some photos, and notes I scribbled at the time in my notebook. Hopefully it gives some flavour of a really great show.

Playing with Greek gods and mythical figures, like Petrina Hicks in show I’d seen the day before. Similar pastel palette too. Also makes me think of Laure Prouvost at the 2019 Venice biennale – the weaving together of modern day ephemera with ancient symbols and forms.

Mystery of sea. What lies beneath. Deep, dark dimension, like tales and myths. Mysteries, neon globulous. Personal and unknown.

Bells, music, costume – with tails, tradition, dance. Reworking, revisiting. In video, no obvious start or finish. Ancient culture like a great unknown dimension to explore. Within and beyond.

Strange sensation, standing next to this sculpture, feeling a oneness with it, as we both watch the AI-informed movement on the screen. But at the same time grossed out by the faux-fur and textured-material combination of it. Both watching though.

Overall the arc of the show felt like a drift from ancient human feedback loops, formed of story and myth; towards this final interpretation rooted in machines and programmed repetitions.

I am an artist and writer. I send a monthly newsletter of interesting things fresh from my studio. Sign-up below for your monthly dollop of creativity