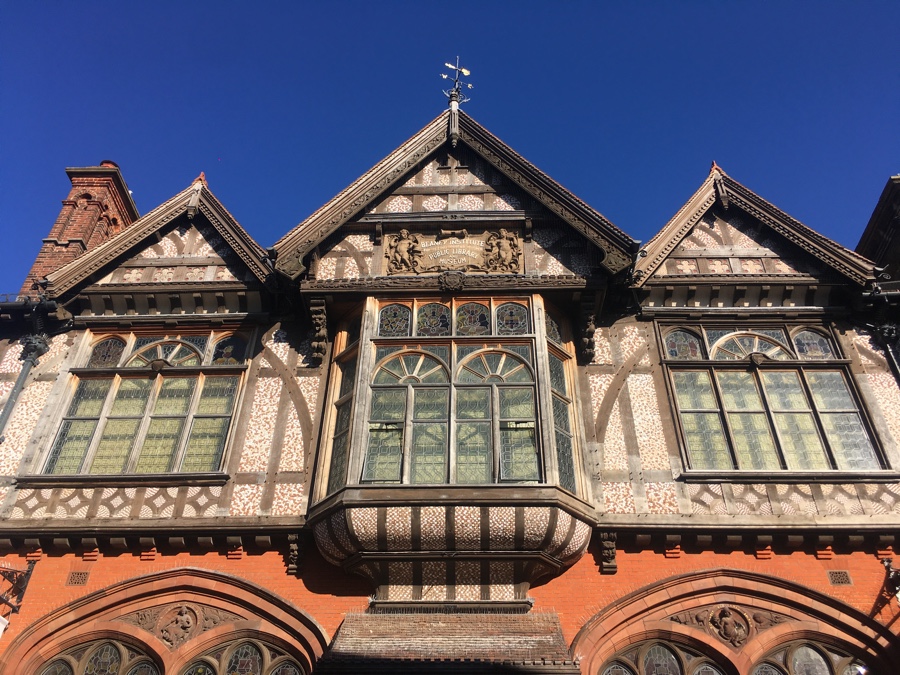 The Beaney, or to give it its full name these days: ‘The Beaney – House of Art and Knowledge’, is what I knew as Canterbury Library as a child. I have vague recollections of there also being a museum-y bit too, but mostly I remember it as a library.

These days it’s a very different affair the beautiful old building has been expanded with a new modern wing, which gives space for both the books and the artefacts to breathe. Highlights from the permanent collection has been wonderfully chosen and displayed. I don’t think it’s too much to say it’s a Gallery-cum-British Museum-cum-Natural History Museum. The curators have done a fantastic job, it truly earns that extended moniker ‘House of Art and Knowledge’

So without further ado, here are six things I utterly loved on my recent visit.

I’ve been walking and drawing in the countryside of Kent, so it was great to see other people’s interpretations of the same land.

First up, Kent through the eyes of American artist Alfred Cohen, who lived in Kent from 1963-1978. “It was Kent that engaged my feelings more fiercely than any other place I can remember” he said. And his Oast houses sure do look fierce, under a burning sky!

Next I was tickled by the record of a giant fish, caught in Fordwich. The landscape painting is a recognisable likeness, be it from another era of the water’s edge in Fordwich. But the real deal is the humour of the vast memorandum, of the oversize trout!

I particularly love the astuteness of the painted caption, knowing itself for being a representation. It feels like the counterpoint to René Magritte’s “Ceci n’est pas une pipe”, several centuries ahead of time.

Next up, some pheasants in the woodland. These are forever making me jump when I’m out walking. They suddenly flap up in a giant squawk of feathers and improbability of flight. The woods where I walk feel very familiar in this painting.

I love the silly pheasants I see out and about, and I find it amusing that these pheasants are painted as if they are going for a considered stroll together, and discussing matters of the day!

Next up the beautiful people of Kent – the characters, the society, the life. It seems life could be quite fancy in many coastal resorts in 18th century Kent. And not least in Ramsgate, where French artist James Jacques Tissot depicted this scene.

I love that I can recognise the delicate balcony balustrade from buildings that still stand at the seafront today. On researching Tissot, I disappeared into a rabbits hole of his paintings of elegant society ladies, next to grand windows, exuberant foliage, balconies and in big dresses. I discovered that he moved to Britain in 1871 and was one of the most commercially successful artists of the time. He declined to be part of Monet’s show of impressionist work, but was good friends with many of the Impressionist painters.

All my life I’ve been mentioning Canterbury Cathedral or ‘The Canterbury Tales’ as a reference, when explaining where I come from, or why somebody might have heard of Canterbury. My secondary school had an end of school year service in the Cathedral each year and it was pretty hard not to have heard of Thomas of Beckett’s murder. I think it was the bit on the cathedral visit, where the guide pointed out the staining on the stones leading down to the crypt, which they think was caused by Thomas of Beckett’s blood and brains being dashed against them. It somehow sticks in the memory

It’s only later in adult life that I’ve started to really grasp the historical significance of this episode. That it lead to many pilgrims visiting this city for centuries to come, bringing an ongoing income to the city and connection with the world. And then a bawdy compilation of verses being written, that is one of oldest well known works written in the English language, telling of those travellers.

So it felt only right to ruminate on this, while perusing what I’ll call some Big History paintings and works. Starting with the big and bombastic, history with a capital H, work by John Opie in 1793

It’s interesting to note that this painting was made over 600 years after the event – that for all it’s ‘realism’ in style, it is very much an imagined scene. Next up a portrait of Geoffrey Chaucer – apparently there are very few portraits of the writer, and none painted in his lifetime. Instead later artists have worked from engravings made shortly after his death that appeared in manuscripts at the time.

Next up is a wonderful set of carved wooden spoons, commemorating the various characters that tell their story in The Canterbury Tales. There are many paintings that take on this subject matter, but I’m going to guess very few sets of spoons! Having recently finally read The Canterbury Tales, or some of it, I delighted in spotting the names of the characters whose tales I’d read!

And last but not least, actually this is very much my favourite is a wonderful print inspired by The Prologue of The Canterbury Tales, by the wonderful artist Elisabeth Frink.

I just love the economy with which she designs her printing plate. It is a masterly demonstration of how to combine the two disciplines of aquatint and etching to the utmost effect.

A wonderful arc of paintings selected and shown to delightful juxtaposition. From Gillian Wearing’s 2000 work, “My Man” depicting a young woman, alongside the preliminary sketches and painting of “Daisy Law”, by James Palmer.

The rainbow handwritten biro text in Gillian Wearing’s piece immediately recalled memories of writing as a teenager. It turns out Wearing collaborates with her subjects, and these words had been written by the girl in the photograph.

And at the other end of the age spectrum, the careful lines and notes of James Palmer’s preliminary sketch were a joy to observe.

And to see women at work, what better artist than the magnificent Dame Laura Knight. How wonderful to discover she had documented Kent’s migrant hop workers and to see her work hung in such an inspired manner, below the very tools of the land.

From women, the inspired arc of curation continued with several portraits of childhood through time. With the young boy, working in the fields in Dame Laura Knight’s painting still in sight, the contrast with Sarah Spencer’s portrait of her daughters in school uniform, and Gerald Norden’s children playing couldn’t be starker.

I think these central two paintings, of education and play are the vision of childhood every child deserves. but sadly not all receive.

Sometimes childhood can be a time of feeling misunderstood, excluded, the gulf between the child’s world and that of adults seemingly vast, as hinted at in Harriet Halhead’s painting. This feels like an adult’s memories of childhood transposed onto a wistful child, dressed in black. And lastly a much earlier vision of a wealthy childhood dating from the 1600s.

This painting offers an interesting counterpoint as we question gender constructs in childhood today. The child on the left is a boy, and at the time it was common for children, both girls and boys alike to wear dresses until the age of 6 or 7.

And moving on to temporary displays, ‘Into the Light’ was an excellent piece of community curation drawing on some The Beaney’s vast unindexed, under-investigated collection. Working with local students who suffered from anxiety, The Beaney provided training in how to handle archival material and let these volunteers select pieces for display.

My personal highlight from the discoveries by the community volunteers were the wonderful woodcuts by Monica Poole. They are utterly beautiful in their muted tones, reminiscent of both old biological illustrations and the natural forms of Georgia O’Keefe’s work, simultaneously. It’s interesting to note that both women would have been working at similar points in time.

I think drawing connections between a community and its history is so vital, the discovery of this little engraving of a medieval queen is a lovely illustration of this in all senses.

The one piece of art I could recall from childhood visits to The Beaney was Thomas Sidney Cooper’s huge painting of a cow. In fact he’s probably the most well known artist associated with Canterbury and his ouevre is very bovine indeed! He was a man who specialised in painting cattle and sheep, and generally pastoral and farmyard life. A real documenter of a certain way of life and moment in history. And he wasn’t afraid to go large …

Looking at his work now as an adult, I see so much more than the big cow that engrossed me as a child. I see a man who has chosen to paint this animal on a monumental scale – a huge physical task but also paints this subject as larger than life, and larger than man. Quite a statement in Victorian times.

Back then in Britain large portraits were generally commissioned by wealthy men of themselves. Man was viewed to ‘naturally have dominion over the beasts and land that God’ had created. It was a time of the Industrial Revolution, when Britain and the world were suddenly exploiting the world’s resources at a much greater rate – bending nature’s bounty to man’s wants. It therefore seems a bold statement, to paint his chosen subject, the cow, at such a vast scale.

The painting was shown at the summer show at the Royal Academy in 1874 and failed to secure a buyer. He titled the work ‘Separated, but not Divorced’, it seems to speak of much.