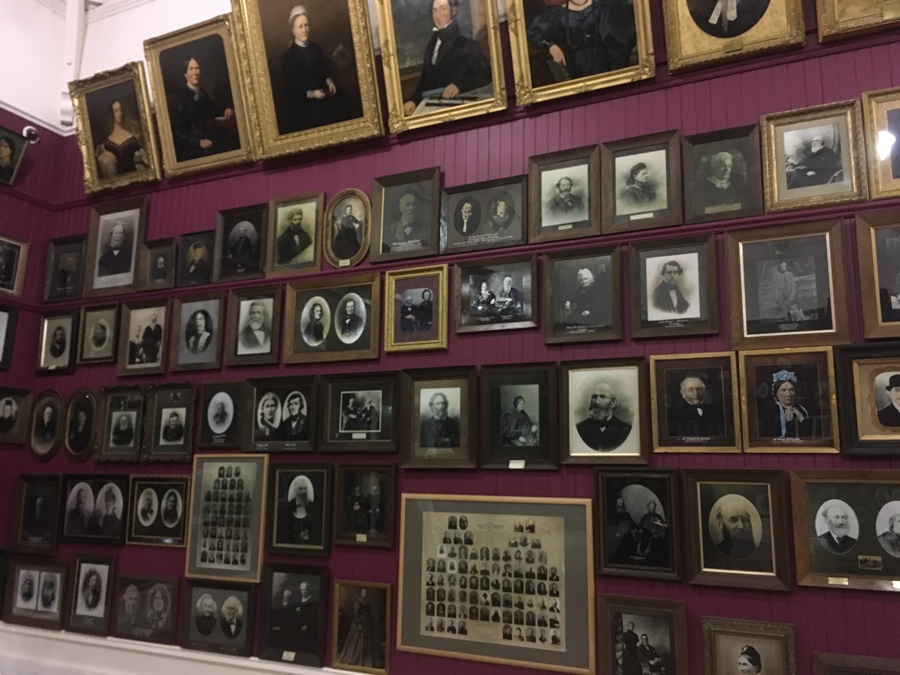 Staring out from the wall of the Otago Settlers Museum, in the far south of New Zealand are hundreds of faces. From floor to ceiling, eyes resolute and unflinching, all around you. Stern and uncompromising, faces from over a 150 years ago and far away.

For these are the faces of the largely Scottish immigrants who chose to leave their homes and lives in Scotland in the mid 1800s and seek a new life. They spent months at sea, to arrive at the end of the earth. Most immigrants passages were heavily subsidised, in exchange for their labour in the new settlement. There can have been no hope of return.

The settlement of Otago was officially established in 1848, and Dunedin was the main ‘city’. Its name taken from the Gaelic name for Edinburgh and its river also christened the Leith. The community was staunchly Presbyterian and their hopes of finding a better, life, were strongly tied up with their religious aspirations. To practice their faith and foster an ideal and devout community.

When they arrived in Otago in the mid 1800s, it was a small isolated settlement, described by the artist as ‘sunk in poverty and filth’, much faith must have been required ..

In order to keep time in the new settlement, an old Napoleonic canon was located on a hill and fired every Saturday at midday, to enable people to check their time pieces.

It had been know for a while that there was gold in the local area, but the community feared an influx of people and money. In the early 1860s word got out that gold had been discovered in the Otago valley and arrivals accelerated. Miners from Australia, China and the UK, all seeking their fortune …

With gold came wealth for the city and even street lighting ..

By the 1880s, Dunedin had a fittingly grand bank, to manage the local wealth …

Life had changed fast in this community – with newly found wealth, a population that had doubled, tripled, quadrupled and showed no signs of slowing down. The religious idealism hadn’t prevented social problems emerging – life was still hard for many, living in poverty, trying to eke out a living, with prostitution, gambling and alcoholism rife.

So no wonder that at this time the community wanted to look back to their ancestors, remember and mark how they had come to stand there. How much they had achieved, how far they had come -literally and metaphorically. It was 1908, a few years into a new century, 60 years after the Otago settlement was officially established, when the community opened the Otago Settlers Museum. A space to bring together and collect the faces of the founders of their community.

A huge effort was made over the coming decade, to populate the room with the faces of all those who had founded the community. Searching for the records and photographs of all those who had arrived prior to 1864. From wealthy families there were large oil portraits, but all who had arrived before the end of the Gold Rush earned their place on the museum walls as they strived to ‘Reanimate Otago’s Pioneers to fame undying through the dying years’

And today it remains a fascinating record of a community that hoped, persisted, struggled and survived. The men and women, old and young and how their descendants chose to remember them. Faces from an entire community, collected by a community that wanted to mark and declare its existence.