I started life drawing on a regular basis back in October 2018. I’ve written a few posts sharing my progress since then. And I’m due another, to reflect on my drawings from this Autumn.

I try to share these as an unedited stream of drawings, in chronological order. I do this to not deny the hours of practice and many painful drawings it takes to reach a ‘better’ drawing. I don’t want to perpetuate the myth that drawing is some magical gift that some people have and others don’t.

I find it helpful to remind myself that these difficult drawings  are part of the ebb and flow of life drawing. That it’s not the single drawing that matters, but the overall practice of life drawing that counts. What I learn cumulatively over time. But it’s still hard. There are times when I have too many expectations in my mind, my ego isn’t happy and drawing feels tough. I was definitely in this zone for a few weeks, and there were times when I felt physically sick and nauseous while I was drawing.

But it’s really reassuring to be able to look back now and see that I made it through that time. That my work has continued to evolve and that I’ve braved trying to draw more accurately.

I’ve been working on loose sheets so it can be tricky to remember the exact order, especially when it’s the same models over a number of weeks. I know these were definitely my first few drawings after the summer break. Initially a few short poses, 2 minutes or so I think

Over a number of weeks I’ve drawn from two lovely models Luciana and Miguel. Often it is a couple of  poses with one, then a few poses with the other, during the same session.  This definitely makes it harder as your eye as to readjust to an entirely new body within the same session. But over the weeks I’ve really enjoyed drawing them.
I’ve been exploring playing with volume and tone, using a big oversized ‘smudger’ and trying to be a bit more accurate in my drawing!
IMG_4174
IMG_4175
IMG_4176
IMG_4384
IMG_4381
IMG_4355
And next up is Miguel, the first and last drawings here are two of my favourite drawings this Autumn
IMG_4351
IMG_4354
IMG_4350
IMG_4383
IMG_4352
IMG_4353
003 The Awkward Session
This session happened somewhere early on in the weeks of drawing L and M above. I was drawing in a different location, with a different group of people and somehow the session felt intensely awkward and hard.
You can see some real moments of utter frustration in this series of drawing. My head got too involved, I’d drawn this model previously and it came as a  shock that something that I’d felt so familiar with, could suddenly feel so different. Eventually I managed to get to a couple of interesting drawings, but it felt like very hard work!!
One of the things that was so different, was the amount of space around the model and the distance I was from the model. Actually a real treat to draw with such a setting but initially I didn’t know how to deal with it. Since this session though, I can tell in my drawings of L and M above, I became more interested in setting them in space – the later drawings in these series, with more smaller figures.
Anyway, on with the awkward series … the first marks started well…
IMG_4178
IMG_4179
IMG_4180
IMG_4181
The moment of intense frustration. My brain / eyes were not dealing well with this pose. Drawing a very fore-shortened arm, in the air, from a distance. I wasn’t expecting to struggle so much with working out the angle/relationship between the raised arm and the model’s head and it came as a shock .. as you can tell! 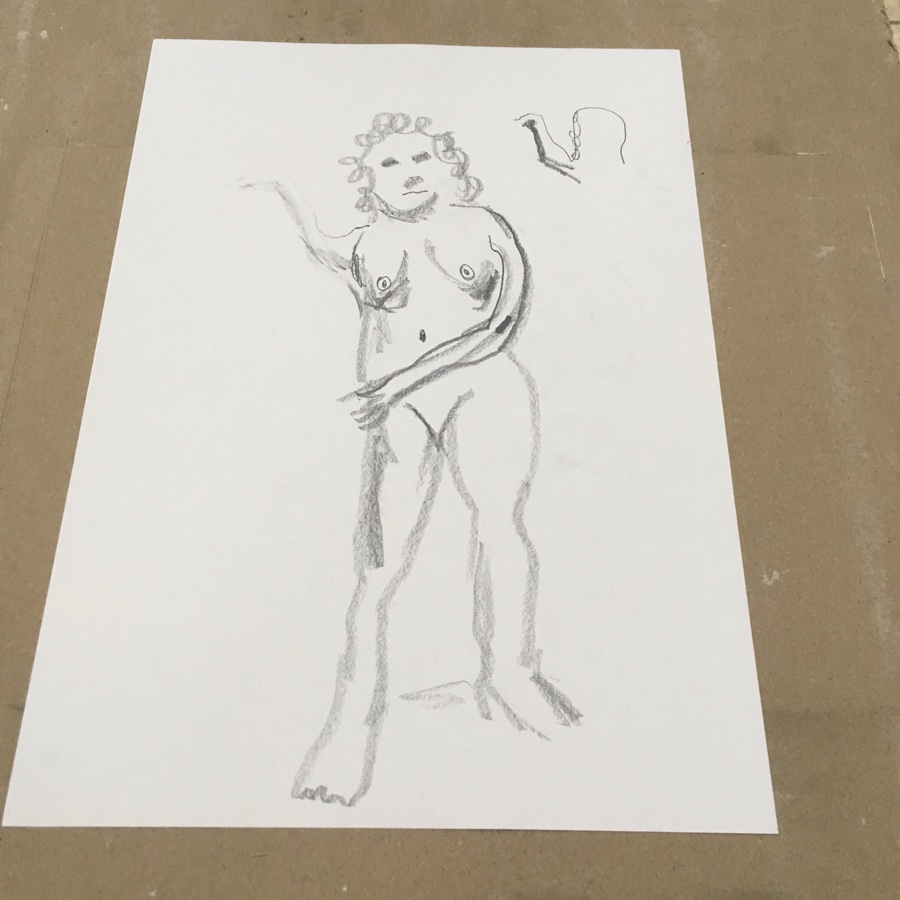 Retreating to working out some tonal things, then trying to just keep on drawing. The standing figures look half-reasonable here, except I know the model is not this tall! And somehow my brain was doing some weird distortion of her figure. In the seated poses, you can see I’m still struggling to trust my eyes. My favourite thing of these few drawings is the model’s feet in the very last drawing below …
IMG_4332
IMG_4336
IMG_4333
IMG_4335
IMG_4334
And then ending with two longer poses and it finally felt I’d got somewhere useful …
IMG_4337
IMG_4338
004 Drawing Workshop
I attended a great drawing workshop, trying out this method of life drawing using a combination of gestural marks and a lot of straight lines. We started off with a lot of quick 30 second to 1 minute gesture drawings, which looked a bit like this …
IMG_4362
IMG_4363
IMG_4364
IMG_4365
IMG_4366
IMG_4368
IMG_4370
IMG_4371
IMG_4372
IMG_4373
Then over the top of our light gestural marks – (note to self, I really must get better at making faint gentle marks, not my natural inclination!!)- you can then start to observe lots of straight lines around and within the body. Looking for the salient points of the model’s form and recording the relationships between them with straight lines. It sounds weird, but slowly a figure emerges from the lines. This time we were drawing for longer, around 20 minutes for each figure:
IMG_4375
IMG_4376
IMG_4377
IMG_4378
I’m not sure what’s going on in the first drawing, I think it was our first try at practicing observing an angle with a pencil outstretched and ‘pulling it down’ to the page. Then the next few drawings you can see a figure emerge from a mesh of straight lines!
005 Long Pose
I was lucky enough to try drawing from a model in a long pose for the first time. Up until now the longest I’ve ever drawn a model for is 20-25 minutes in the same pose. But this session was two hours long, with the model holding the same pose throughout. Its done in 20 minute spurts, so the model gets some rest breaks! But each time they carefully return to the same position. This was my first long drawing … 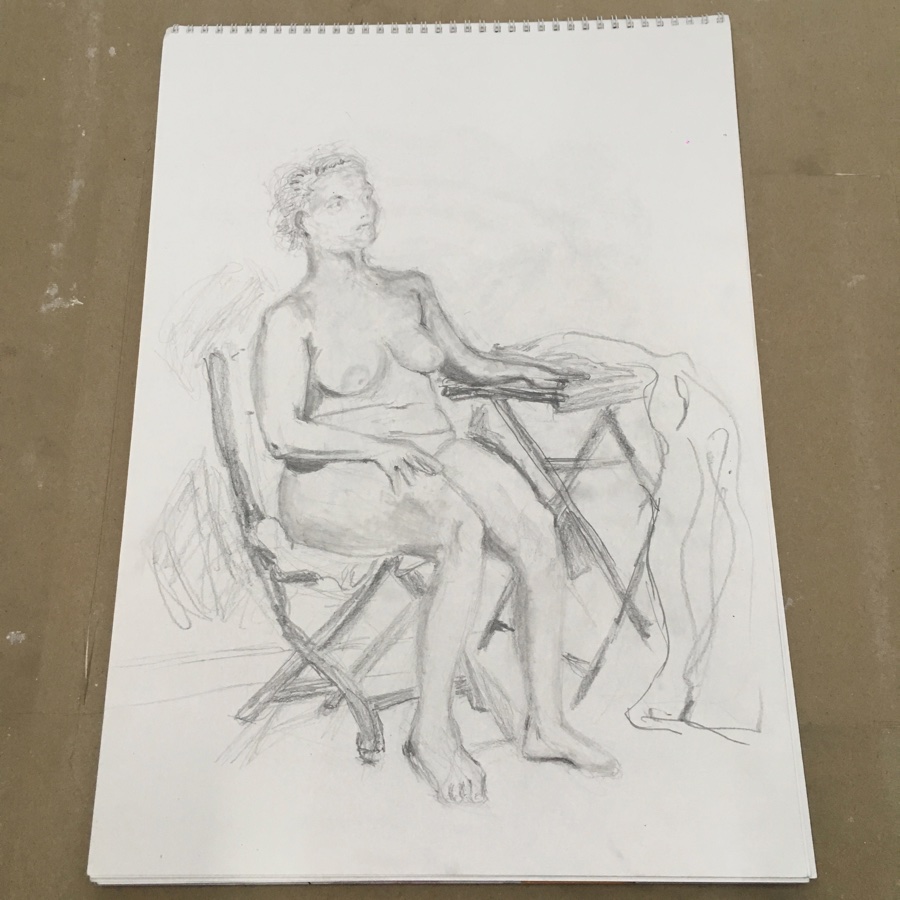 I found the breaks for the model were really helpful in giving a moment to step back and assess how your drawing is progressing. I’m now deadly jealous of people who got to art school and spend hours and hours drawing like this!
006 Brown Paper  .. Session 1
I switched to some new paper, trying out brown craft paper.  I’ve drawn on brown paper before and it’s really interesting working with a mid-tone, rather than white ground. But this paper also has the added dimension of quite pronounced ridges, which make for some interesting texture …
IMG_4398
IMG_4399
IMG_4400
IMG_4401
IMG_4403
IMG_4404
IMG_4406
And as I got used to it, I started to find some texture that I was really enjoying.
IMG_4402
IMG_4405
IMG_4407
IMG_4408
IMG_4409
I was drawing with an old pencil I’ve had for a long time. It has an extra thick and very soft lead. Perfect for building up tone, shading at an angle. The only problem was that it’s now such a short pencil that my little finger pretty much had a friction burn by the end of the session!
007 Brown Paper .. Session 2
This time I tried a few different types of pencil in the early poses, trying to find something that worked well with the paper. The charcoal looks great in the photo, but was really sliding off the page, so not really a good option for the whole session.  Regular pencils are a bit of a non-event. The red sanguine, looks nice, but I only had the tiniest smithereen to draw with, so again not really viable for the whole session. Do need to buy some for future drawing though.
IMG_4412
IMG_4413
IMG_4414
IMG_4415
IMG_4422
So I decided to continue with the softest pencil I had, I think a 6B, and slowly some interesting drawings started to emerge
IMG_4418
IMG_4416
IMG_4421
IMG_4424
IMG_4423
IMG_4425
IMG_4426
IMG_4427
IMG_4428
IMG_4429
008 Second Long Pose
Another session drawing from the same pose over an extended period of time. I’m definitely keen to do more of this … 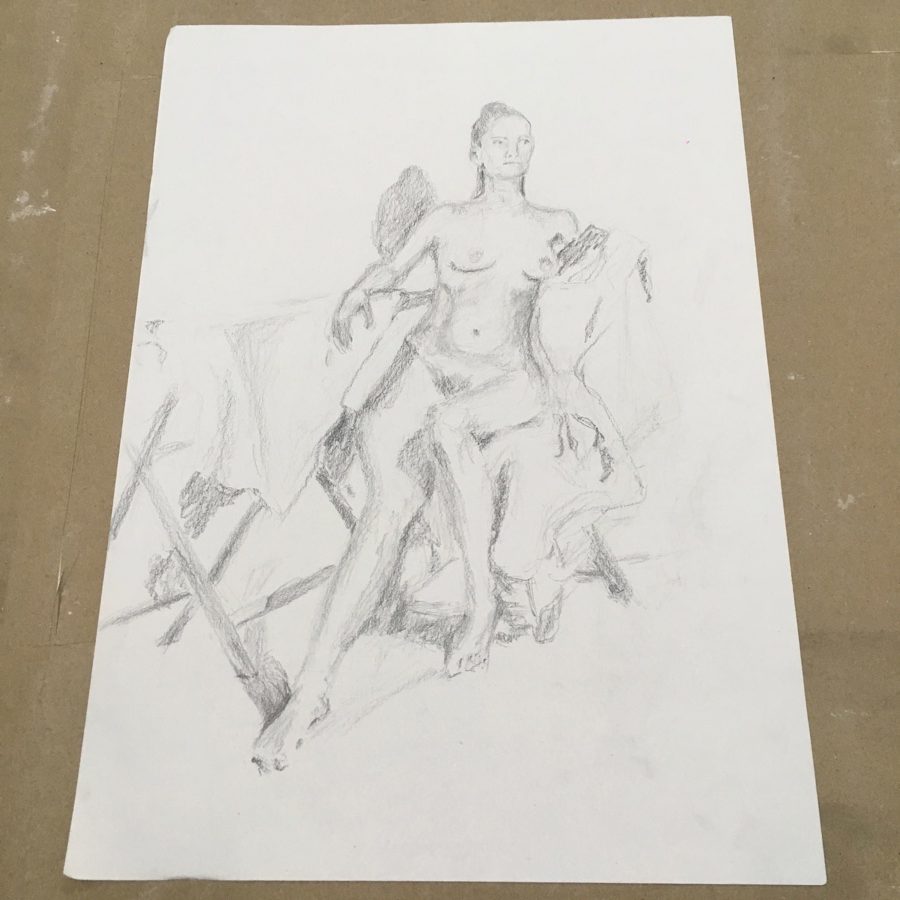 009 Brown Paper – Session 3
This time  it was the same model as the first long pose above.  I find drawing a model for the second time is often easier. Somehow your eye and brain is a bit more familiar with their form. Plus by session three I was feeling a lot more familiar with working on the brown paper. These were the first few shorter poses, from 2 minutes to 10 minutes, I think ..
IMG_4430
IMG_4431
IMG_4432
IMG_4433
IMG_4434
IMG_4435
IMG_4436
IMG_4437
IMG_4438
IMG_4439
IMG_4440
And then into some longer poses .. these three drawings are some of my favourites this Autumn.
IMG_4445
IMG_4444
IMG_4446
IMG_4447
IMG_4448
IMG_4450
IMG_4449
And I’ve been thinking recently that I’ve been getting much better about not running out of space and my figures not falling off the page.  And perhaps this is the exception that proves the rule! .. This type of outstretched pose is one of the most awkward to compose on the page. But even this attempt feels a lot more in control and considered than some of my older drawings … 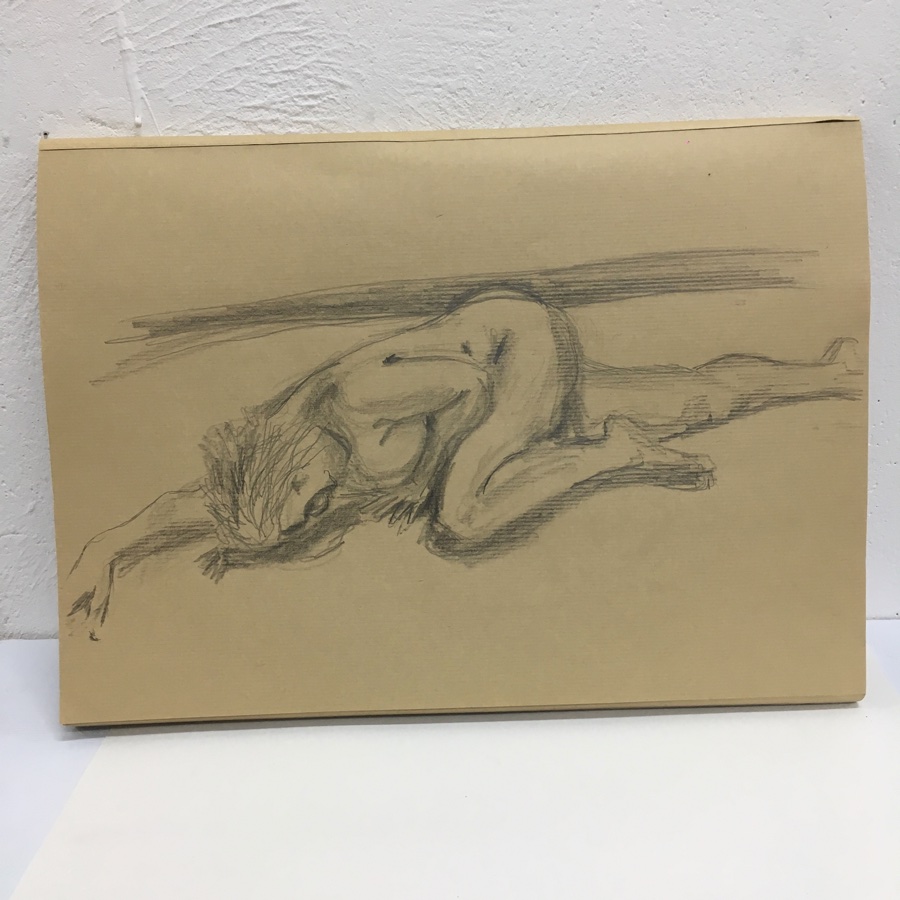