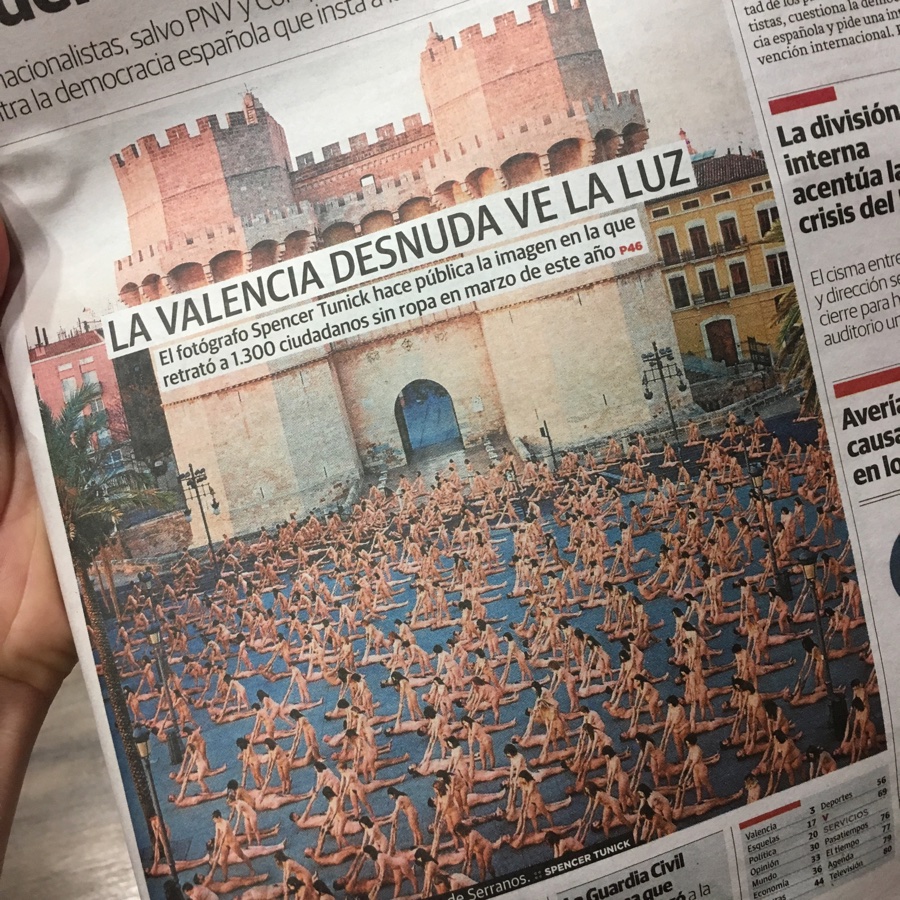 I recently collected a print of this photo. One of the smudgy fleshy figures is me. Somewhere to the mid-right, on the paving, before the road. Me along with 1,300 other people, naked, on a very cold morning in March earlier this year.

How did this come to be? Well, litererally speaking, I’d taken my clothes off in an art centre 300 metres away. I’d walked along some very cold, cobbled medieval streets in Valencia and was one of the hundreds of volunteers taking part in a photoshoot with American photographer Spencer Tunick.

But more broadly speaking how did this come to be? Particularly, as a year ago, I’m not sure I’d have imagined taking part in such a thing. Yet I did, and it was a wonderful, joyful thing. Utterly inspiring, thought-provoking and life-affirming. For me the experience was an important point on what I can only describe as an ‘arc of nakedness’ during the last year.

It started last year with life drawing. Each week attending a drawing group and drawing from a naked model. A classic in art education. I’d see different bodies each week: male, female, all ages, shapes and sizes; and battle with trying to conjure their likeness on the page. Despite the fact there’s a naked person in front of me, I find I am utterly absorbed in the act of drawing.

I don’t find myself thinking at any point what this person’s body ‘is like’ – whether it is larger or smaller, skinnier or more muscular; these words or perceptions seem to melt away. I’m more concerned with how the light grazes across their thigh or how the shadow is cast by their rib cage. You appreciate the many  forms of the body, from the sharp jut of a collarbone, to the soft sweep of a thigh’s belly. It is a very different way of perceiving the body to that which I typically feel in the world around me. It is not wordy or judgemental. It isn’t reductive and nor does it seek to categorise or label. And to me that feels entirely refreshing. It changes your relationship to bodies, your thoughts and considerations of them. Drawing gives you another way to think, to respond, to see. You see beauty everywhere.

And with this feeling growing over the months of drawing, I came across an advert for the Spencer Tunick photoshoot here in Valencia. They were looking for volunteers for a mass nude photograph in Valencia. I perused his work online – hundreds of naked people on the steps of the Sydney Opera House, thousands in a plaza in Mexico City, occasionally some bodypaint but generally a sea of naked people, carefully arranged outside. Could I imagine being one of them? A year ago, no. But somehow at the start of this year, yes.

I was struck more by wondering what it would feel like to be naked outside? To be naked with a mass of other people? That actually, when else would I ever have the chance to experience something like that?  That it’s a totally unique thing. You could say FOMO got me, but it felt more like somehow, through the months of life drawing, my mind had become open to the idea of nakedness. I no longer found it a scary, alien or unknown idea.

Don’t get me wrong, I was still apprehensive. After downloading the waiver form,  it took me several close-readings of it and a few days until I finally signed  and returned it! And it turns out I wasn’t the only one who had plucked up the courage to take part. It was 5am and cold and dark, on a Saturday morning and there I was, in a huge crowd of people all wrapped up in winter coats, hats and scarfs. The street outside the art centre was chock-a-block, jammed in both directions. It reminded me of rush-hour on the tube in London, when the platform is closed due to overcrowding and the crowd outside is heaving, impatient, a sense of anticipation in the air.

As we waited, I got chatting to a Spanish lady, mostly about our nerves and how we both agreed that it felt easier to sign-up for alone. Rather than with a friend. And then the huge doors of the former monastery, today the Centre del Carme, an arts and cultural centre, heaved open. And slowly the crowd jostled forward, through the bottleneck of the door and the palaver of handing in signed waiver forms. Spilling out the otherside into the graceful 15th century quad at the centre of the former monastery. Men were directed off into another area and gradually the arched walkways around the quad filled with expectant women. Despite the cold, a warm nervous energy bristled amongst us.

Having come on my own, deliberately, I then promptly bumped into quite a lot of people I knew. Perhaps unsurprising given I’ve been getting to know the art scene in Valencia! There were two other artists from my shared studio space, a lovely model who I’ve drawn a lot, a friend I know from a drawing group and a lady who I’d met recently at a re-enactment of Marina Abramovich’s famous art performance, The Artist is Present.  Actually, this was a good thing, as it turns out there’s a lot of waiting around at photoshoots. Hilariously with occasional announcements by megaphone, informing us not to take our clothes off just yet! I can see how co-ordinating 1000+ people is tricky business, let alone naked and into an elaborate outdoor formation. Eventually the organisers returned and our briefing began.

Conducted via megaphone, first in English with Spencer Tunick and his assistants speaking, and eched in Spanish with some hasty translation. They explained we’d be doing a series of three poses in different locations around the Serrano Towers. That we’d be taking off our clothes here, in the Arts Centre and walking to the location entirely naked. There was quite a lot of emphasising that we shouldn’t be wearing or carrying anything at all. No hairties around your wrist, no watches etc. There were some demonstration poses, explanation of if Spencer waves his arm to the right, we should all move to the right etc. He also did apologise for it being such a cold morning and explained that wasn’t normal for his work. Kind, but not that useful when you’re about to take all your clothes off!

And then finally, informed by megaphone, it was time to undress. Little puddles of clothes forming along the stone walls of the quad, around pillars and rucksacks. The first tinges of morning light now grazing across the sky above us. It felt significant undressing as a group of just women. I felt no bashfulness about it. There was lots of whooping and cheering, as well as a moment of shock as I realised the stone floor was even colder than I imagined. Cue lots of hopping from foot-to-foot, in an attempt to keep warm. But the biggest surprise, at least for me, was that within about 30 seconds, perhaps less, I’d forgotten I wasn’t wearing any clothes. Yes, physically, I felt cold, but conceptually any consciousness of being unclothed evaporated in a few moments.

Walking out in the early morning light, along cobbled medieval streets, in this jubilant fleshy massy of womanhood was quite incredible. It felt joyous and natural, human and accepting. It is an amazing thing to see so many different female bodies around you. With gentle curves, toned muscles, wobbly bits, skinny frames, wrinkles, tattoos, long-flowing hair, short-cropped hair, tiny breasts, pubic hair, no pubic hair, huge boobs, piercings, washboard stomachs,  eczema, c-section scars and even one full-term pregnant lady. We chatted as we walked naked along the Valencia streets, past bemused clothed security guards, every now and again a cheer erupting from the crowd.

And then it was on to the posing, the men arrived at the Serrano Towers, cue more whooping all round. My partner in the poses was a lovely architect, originally from Valencia who now lived in Venice. He’d come back especially to take part! We chatted away, with plenty of eye-contact, that seems to be the etiquette of nudity as far as I can tell! The novelty of taking part in a mass photoshoot with a famous photographer was starting to wear off. It turns out they take a long time, there’s a lot of trying to evenly distribute people, make sure early morning dog-walkers aren’t in shot and standing still. All of which becomes increasingly chilly as time goes on.

We finished on an all-female pose, under a fig tree near the towers. The energy and camaraderie amongst us was unwavering. There was some impromptu penguin-style huddling as we waited for the return of the photography team. I can report it is definitely warmer on the inside of the huddle – those penguins are onto something! And finally the shoot was over and there was one exhilarated mass of women pouring back through the streets of Valencia . Ecstatic at the thought of putting our socks back on! We’d been outside for a good two hours, utterly starkers, in what the newspapers would later tell me was 8°C.

As I collected my photo recently, it struck me again how incredibly unique the experience was. That with a media obsessed with body image and appearance, particularly that of women; that in a society with endless pornographic images of women available, yet where normal female bodies are censored on social media, it was a rare dose of normality, truth and light. Compared to the narrow presentations of women I’m accustomed to seeing in TV, Film and Media, which tend towards the younger, slimmer, whiter and more smooth-skinned, the light felt blinding. A dazzling multi-faceted diamond of womanhood, shining in all its natural glory. It sometimes feels like society endlessly tells women what they should or shouldn’t look like; who is acceptable, who is not; yet that morning all were welcome. There were no boundaries, no exclusions;  every body was welcome and celebrated. And months on its still sinking in, how rare that is.