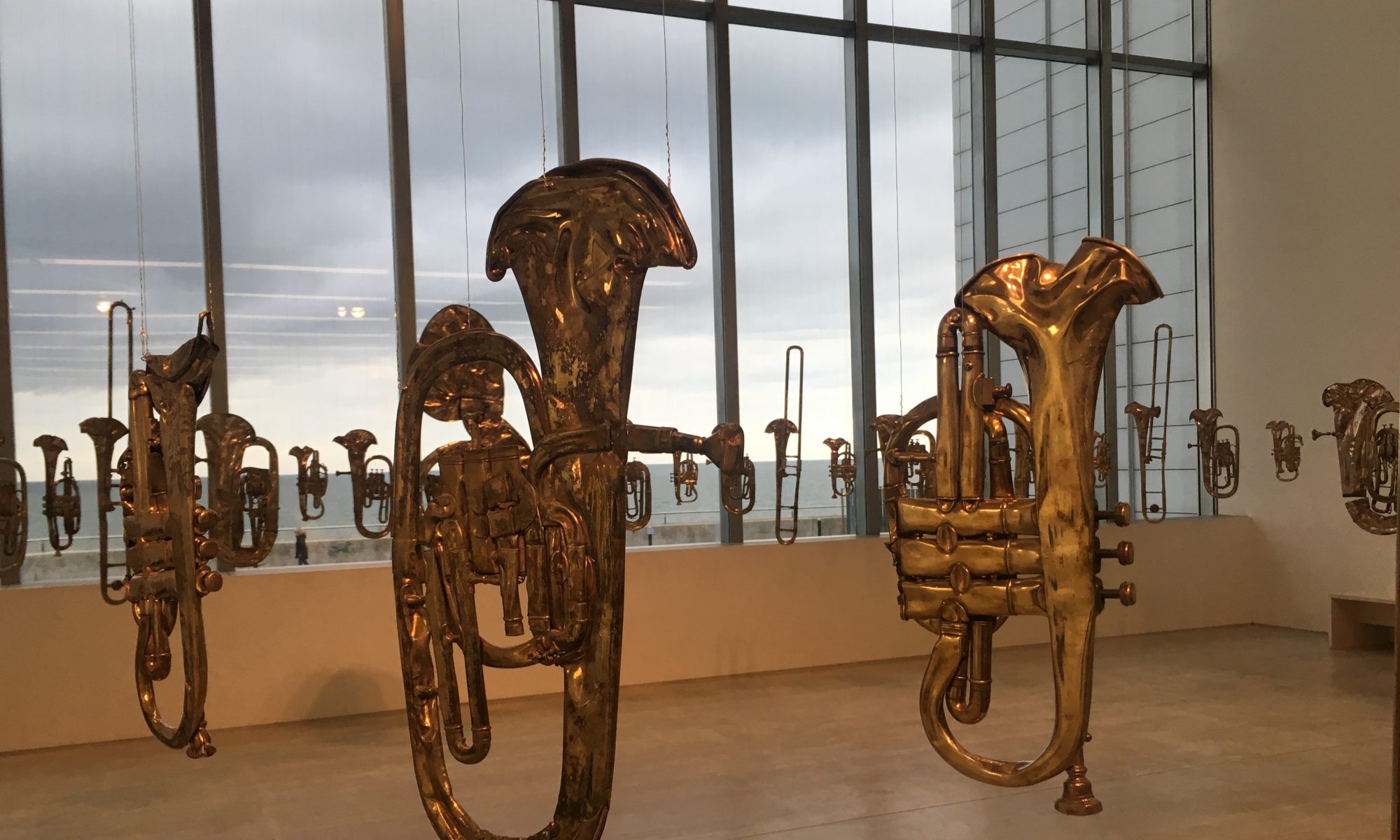 I love the way the human brain can conjure up connections between seemingly disparate things. Thoughts, ideas and suggestions can present themselves at strange times. And if I’m lucky these thoughts may start to coalesce into what I call a ‘thought noodle’. A wiggly but interesting path between unexpected things.

Back in January I saw this:

It is made up of 60 flattened musical instruments that once belonged to a BRASS BAND, suspended in a circle. Cornelia Parker says: “ I resurrect things that have been killed off. My work is all about the potential of materials – even when it looks like they’ve lost all possibilities’. The work was originally created for an exhibition in the North East of England where the declining mining industry and brass bands are very much entwined.

It was an incredibly beautiful thing to look at. The marbled metallic forms, suspended against the light of the sea, colours ever changing as I moved around the work. As I tried to take a photo that would capture this feeling, it felt as futile as trying to a take a photo of the sound of a brass band.

A few weeks later I was listening to Desert Islands Discs. Happily chopping vegetables while making some dinner and suddenly Jeremy Deller also a contemporary British CONCEPTUAL ARTIST is talking about BRASS BANDS. He was talking about ‘Acid Brass’ a work he made in the 90’s. Though he wasn’t a raver himself, he was struck by the sheer volume of young people heading to parties. In the UK the M25 motorway around London – the London Orbital Motorway – had recently been completed, in 1986. And it seemed to be the lifeblood that delivered ravers to well, raves. Deller says it felt like the biggest mobilisation of people in Britain since the miners strike. That somehow it was an important moment, people behaving in a new way en masse, the industrial giving way to the post-industrial. And so he embarked on  finding a brass band would would perform acid house.

And he also describes this work as his ‘coming out moment’ in art – the moment when he was liberated from making objects and things. An important point in art. And there rests my thought noodle for now.

Perpetual Canon by Cornelia Parker is on display at The Turner Contemporary Gallery in Margate until the 7th April 2019. For FREE!

You can read more about Jeremy Deller’s work Acid Brass here, in fact his entire website is a joy to noodle around.

Desert Islands Discs, the long running BBC Radio 4 programme has a magnificent archive. A veritable cultural lucky dip. This is the Jeremy Deller episode I mention.

A few rave classics that I listened to while writing this article ..

All of Orbital’s back catalogue on Spotify. Additional trivia, they are named after the M25

And The KLF, or what I can find of them. The Last Train to Trancentral on Youtube – the track picked by Jeremy Deller on Desert Island Discs. There’s no back catalogue on Spotify as they famously deleted their entire back catalogue in 1994. In fact many of their antics verge on the side of conceptual art, you can read a nice potted history here.