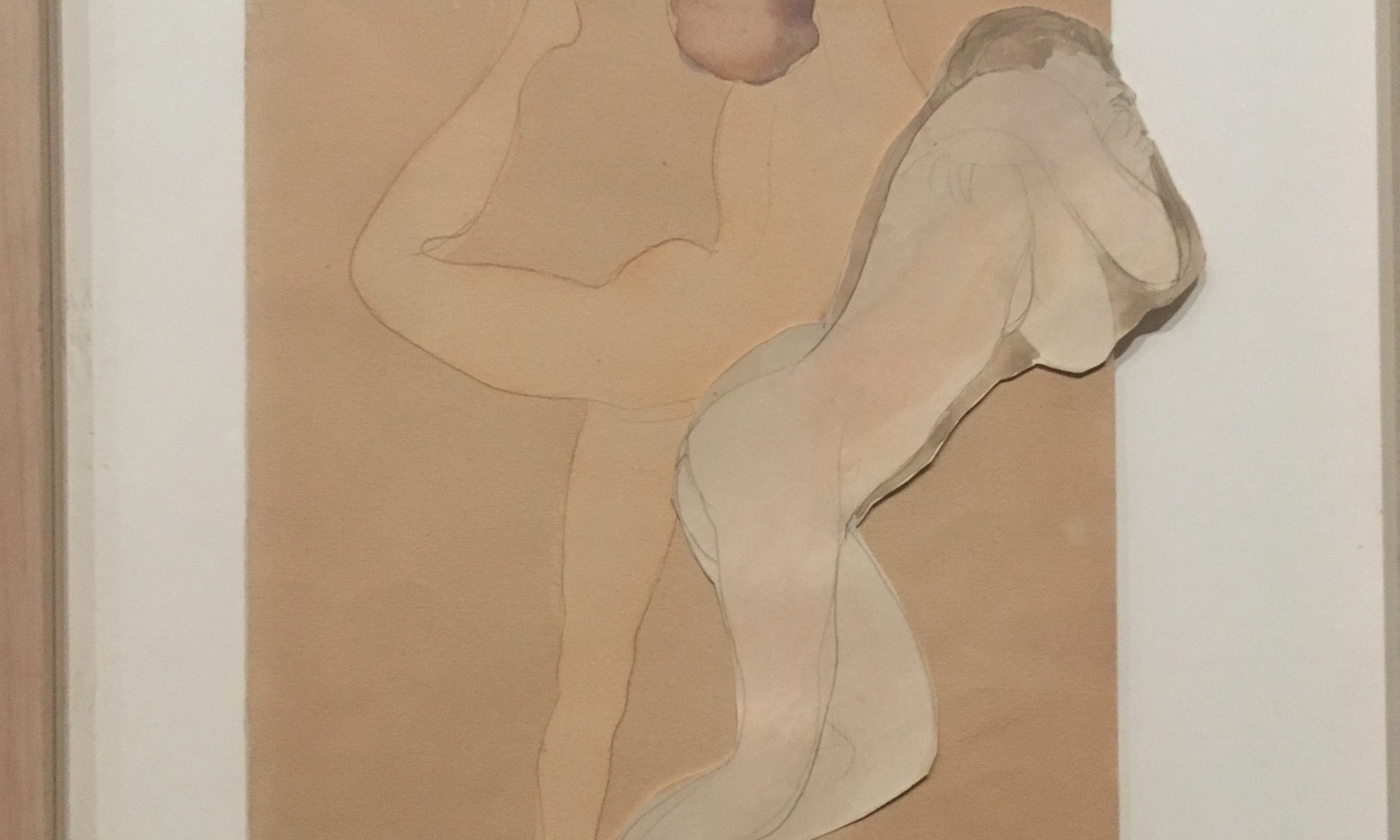 Like most people, I know Rodin as a sculptor and clearly a master of the human form. Unsurprisingly he did a lot of drawing from life. I was thrilled to see this show, particularly given how much life drawing I’ve been doing recently!

The most amazing thing about the show was the revelation that Rodin was utterly obsessed with making his figures stand out, even when working in 2D. He uses frames, decoupage, colour, keeps working and re-working similar figures. He is a man obsessed with how the figure occupies space. Its fascinating to see these studies and witness some of the process that informed his 3D work.

A drawing and cut-out of Dionysos from Rodin’s student days, pre-1870. I’m always fascinated to see artist’s work from their very early days.

In his ‘first period’, as described by gallery commentary (interesting to think that he would have been in his 40’s at this point), he liked to paste his drawings onto larger pages. He would use for example prints from a catalogue of fabric samples to frame his drawings.

These cut-outs depict masks and demons related to Dante’s Inferno and served as preparatory studies for Rodin’s sculpture The Gates of Hell. Rodin began with a pencil drawing using a brush or pen to add ink which he heightened or mixed with white gouache. The outlines were sometimes redefined with ink or pencil.

Rodin called his falling figures ‘demons in space’ and they resemble Mercury in his Gates of Hell.

And The Gates of Hell. Pretty shocking and dark, on display on the sunny grounds of the Rodin Museum.

From 1890 onwards, now in to his 50s, Rodin preferred to draw from life. His style became simpler and it is fascinating to see his process. He started with line pencil drawings and just kept going on the same pose. Adding washes of ink or watercolour, to give more body. The cutting out. These works were all done on thick paper, which apparently he rarely used, suggesting his intention was always to cut these figures out.

However during his lifetime, the cut-out below was the only one to be displayed.

Below is a dancer series, based on his model Alda Moreno. He drew from life, without looking at the paper. Simplified and reworked the figure and used watercolour mixed with gouache. Eventually reaching his cut-out and sometimes assembling it with other figures.

His sheer volume of work was deeply impressive. He would just keep going and going and somehow reach his cohesive thing. It felt like slipping into the brain of an obsessive at work.

I felt incredibly lucky to see his creative process so clearly depicted. How an artist takes an initial study and keeps exploring it, examining it, reinterpreting it until it becomes imbued with so much more. His seated lady series shows just this.

He also used colour to ‘cut out’ his figures. Yet again finding another way to control his figures in space.

He carried this practice into publicity for his sculptures. He was keen for his work to be known and had many photographs of his sculptures taken. He retouched a number of these prints, covering the background with an opaque mixture of ink and gouache. Again making his figures stand out, suspended in space.